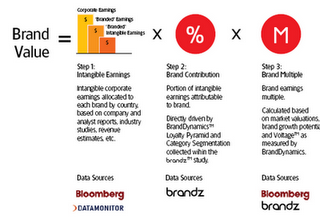 In it’s fifth annual publication of the BrandZ Top 100 Most Valuable Global Brands, Apple has overtaken Google to become the world’s most valuable brand with an estimated brand value of more than $153bn thus Apple Ends Google’s Four-Year Run as Most Valuable Brand.

iPad has pushed Apple ahead of Google and ended a four-year run by Google at the top of the brand ranking. But the study by the WPP research unit also showed a changing of the guard among top brands in other sectors and an influx of new entrants from the so-called BRIC countries — Brazil, Russia, India and China — which collectively accounted for seven of the 11 newcomers to top 100 brands. While the eight top global brands are still U.S. based, China now has 12 brands in the top 100, up from seven a year ago. 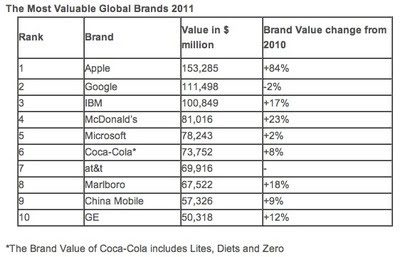 The BrandZ Top 100 Most Valuable Global Brands study is the only valuation in the world that takes into account what people think about the brands they buy alongside rigorous analysis of financial data, market valuations, analyst reports and risk profiles. The research report, which is available online, includes a ranking and analysis of the Top 10 most valuable brands for key regions of the world and 13 market sectors