Selected points from an article by VITO J. RACANELLI in Barron’s 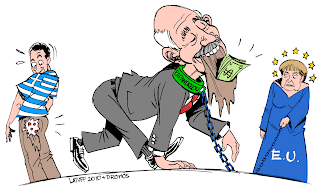 Greek debt stood at 143% of its annual economic output at the end of last year. But as the nation’s economy shrinks, the ratio only gets worse, creating a painful downward spiral. The country has no room for error. If Greece’s economy contracts as expected this year, its debt will rise to 160% of GDP next year. Even if Greece executes the bailout plan perfectly, slower-than-projected growth or higher interest rates could push the ratio towards 180% in a few years, say Citigroup and the IMF.

Last week, in its latest Band-Aid attempt, the government announced new austerity measures that will extract a further €6.4 billion ($9.1 billion) from its reeling economy — through job and wage cuts, and new taxes — a desperate effort to make up for missed budget targets set in last year’s €110 billion bailout by the EU and International Monetary Fund.

The better course is to allow Greece to write down its debt now and try to get its economy growing again. Not that a write-down would be painless. With Greece’s public debt at €327 billion, a 50% write-down means roughly a €160 billion loss for creditors. Many of them are Greeks themselves, of course. Greek banks would need complete recapitalization, and the rest of the financial system would need huge injections of cash.To cope with its crisis, Greece has had to cut spending sharply and raise taxes. Its value-added tax, the main sales tax, is headed for an average 20% increase. As a result of such moves, the budget deficit as a share of GDP dropped to 10.5% last year, from 15% in 2009.