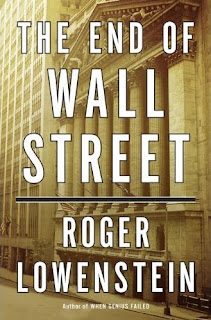 Another tremendous work from Roger Lowenstein, famous author of bestselling book “Buffett: The Making of an American Capitalist” – which is still a sensation among investors around the world – on the way with his new great work, “The End of Wall Street”, soon reach to the hands of investors!

A little about the Author: Roger Lowenstein author of four books, reported for The Wall Street Journal for more than a decade and wrote the Journal’s stock market column “Heard on the Street” from 1989 to 1991 and the “Intrinsic Value” column from 1995 to 1997. He is now a columnist for Bloomberg and he also writes for The New York Times Magazine and other publications.

It is sure, we can expect a lot in this new book entirely written by Roger Lowenstein. This venture is going to be another sensation in the market soon! There are no detailed information available on the book but, the entire contents in this books goes like this:

The End of Wall Street is a blow-by-blow account of America’s biggest financial collapse since the Great Depression. Drawing on 180 interviews, including sit-downs with top government officials and Wall Street CEOs, Lowenstein tells, with grace, wit, and razor-sharp understanding, the full story of the end of Wall Street as we knew it. Displaying the qualities that made When Genius Failed a timeless classic of Wall Street-his sixth sense for narrative drama and his unmatched ability to tell complicated financial stories in ways that resonate with the ordinary reader-Roger Lowenstein weaves a financial, economic, and sociological thriller that indicts America for succumbing to the siren song of easy debt and speculative mortgages.

The End of Wall Street is rife with historical lessons and bursting with fast-paced action. Lowenstein introduces his story with precisely etched, laserlike profiles of Angelo Mozilo, the Johnny Appleseed of subprime mortgages who spreads toxic loans across the landscape like wild crabapples, and moves to a damning explication of how rating agencies helped gift wrap faulty loans in the guise of triple-A paper and a takedown of the academic formulas that-once again- proved the ruin of investors and banks. Lowenstein excels with a series of searing profiles of banking CEOs, such as the ferretlike Dick Fuld of Lehman and the bloodless Jamie Dimon of JP Morgan, and of government officials from the restless, deal-obsessed Hank Paulson and the overmatched Tim Geithner to the cerebral academic Ben Bernanke, who sought to avoid a repeat of the one crisis he spent a lifetime trying to understand-the Great Depression.

Finally, we come to understand the majesty of Lowenstein’s theme of liquidity and capital, which explains the origins of the crisis and that positions the collapse of 2008 as the greatest ever of Wall Street’s unlearned lessons. The End of Wall Street will be essential reading as we work to identify the lessons of the market failure and start to rebuild.

Grab it now with an attracting pre-order price. This book formally available in the market on April 6th 2010 but, a possible discounts would be expected to those who order it right away! Be the first person who read this guide from this fantastic author!