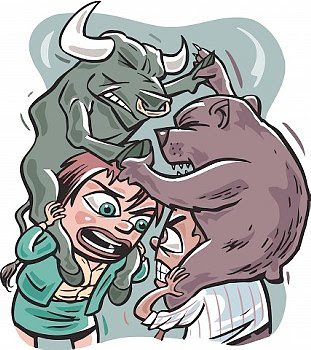 CFDs were created and developed in 1990’s by the derivative department of Smith New Court – a brokerage company based in London. Five years later Smith purchased Merrill Lynch for a total price of GBP 526 millions. Contract for differences originate from Futures and Options, but were created with a slightly different purpose. Initially CFD Trading emerged and was used for cost-effective hedging of equity exposures. The main advantage was the clients could short an instrument and with the use of leverage to cover their eventual losses from physical equity exposures. This was widely used for hedging positions on the London Stock Exchange. Also, traders were no longer required to physically deliver and accept underlying instruments. Since those products are OTC (Over-the-counter) they are traded with significantly lower costs and large institutional traders could easily settle deals and short the underlying instrument without having to borrow it in advance.
In the late 1990’s contracts for differences were introduced to the retails audience and private clients by Gerrard & National Intercommoditie. GNI offered quite an innovative system at that time consisting of an electronic trading platform for settling deals over the Internet. This system allowed direct access to the London Stock Exchange and was an important step towards the overall development of the CFD market at that time. From there the retail market quickly accepted the CFD Trading and those instruments became well known in the UK. This was a kind of revolution since before that, only institutional traders with access to London stock exchange were allowed to short securities. It is important to note that after its creation, contract for differences were only available to large traders and hedge-funds, but gradually became an instrument for speculating the markets among retail traders. Small retail traders were not initially allowed to trade in the London Stock Exchange and enjoy the same advantages as Smith New Court’s clients at the time the instrument was created. Actually, those clients received the right to be on the floor level thus having access to the market itself. These clients quickly realized the advantages of leveraged trading which was far more attractive than traditional trading. Moreover CFD’s have stamp duty exemption status which can further narrow the trading costs. This is derived from the fact that investors were no longer required to physically deliver the underlying shares when taking long or short positions. One of the main miss concepts of CFD’s is that their main advantage is its tax exemption. In fact their major benefit is leverage and the possibility of taking profit from both raising and falling markets. CFD trading is a straight forward process, although certain regulations will change that in the near future. Currently CFD’s are banned in the US and more strict regulations are implemented even in the European Union. The reason for that is lying in the nature of CFD Trading. Each counterparty has to be able to pay the other the difference in the price of an asset at a moment when the other party closes the deal. Several instances of bankrupting brokers because of being short to clients proved that this sector cannot be left without strict regulations. All in all, CFD Trading became quite popular within the last two decade and not surprisingly is widely used by retail investors. It provides ease of access to worldwide markets and reduced trading costs as opposed to traditional stock exchange trading.