Technology News Compiled by Sherin DevAfter months of speculation, the tablet wars begin in earnest this week. Motorola is releasing its Xoom tablet on Feb. 24, and I consider it the first truly comparable competitor to Apple’s hit iPad. That is partly because it is the first iPad challenger to run Honeycomb, an elegant new version of Google’s Android operating system designed especially for tablets. 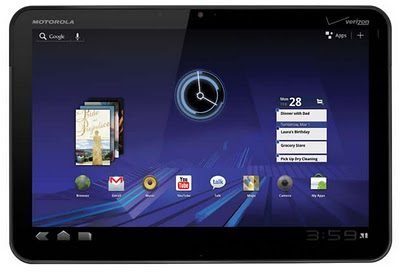 The Xoom has a more potent processor than the current iPad; front and rear cameras versus none for the iPad; better speakers; and higher screen resolution. It also can be upgraded free later this year to support Verizon’s faster 4G cellular data network

Motorola is taking aim at the iPad just as Apple is expected to announce, next week, a second-generation of its tablet. Little is known about this second iPad, but it’s widely expected to take away at least one of the Xoom’s advantages over the original iPad—cameras—and is rumored to be thinner and lighter, since weight was one of the most common complaints about the generally praised first iPad.Unfortunately for consumers looking for iPad alternatives, the Xoom has an Achilles’ heel: price. While iPads come in a range of models priced all the way up to $829—none of which requires a cellphone contract—Apple’s entry price for the iPad is just $499. By contrast, the base price of a Xoom without a cellphone contract is $800—60% more. And even with a Verizon two-year contract at $20 to $80 a month—depending on the data limit you choose—the least you can pay for a Xoom is $600, or 20% more before counting the contract costs.In fairness, the iPad model with the same memory as the Xoom and a 3G cellular modem like the Xoom’s is $729, which is a closer comparison. But it is still less than $800, and consumers still focus on that $499 iPad entry price (for a Wi-Fi-only model.)

Read in details from WSJ