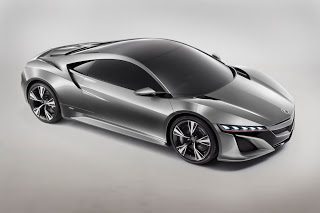 More than two decades ago, the Acura NSX took the auto industry by storm. With an all-aluminum chassis, forged aluminum suspension and wheels, a high-revving V6 mounted amidships, and a perfectly tuned suspension, the NSX was cutting edge technology when it debuted. Unfortunately, Honda didn’t do enough to update the NSX during the 90’s, and by 2005 it was too technologically “old” to be considered a supercar. Honda allowed the NSX to wilt away, a move that puzzled many enthusiasts and Honda observers (including this one) so many years ago.
Today, however, Honda has decided to right this wrong. At the 2012 North American International Auto Show, the Acura NSX Concept was revealed. Featuring dynamic design, lightweight construction, and aggressive style, the new NSX concept was a sight to behold…but a recent press release ups the ante. Unbelievably, the new Acura NSX will be a hybrid.

At first blush, the thought of a hybrid supercar is – at best – perplexing. Considering that most supercars feature big engines that are anything but fuel efficient, Honda’s decision to go with a hybird powertrain have been met with skepticism.

However, President and CEO of Honda Motor Co., Takanobu Ito, spoke on the re-envisioned NSX saying, “In this new era, even as we focus on the fun to drive spirit of the NSX, I think a supercar must respond positively to environmental responsibilities.”


Honda’s plan? Engineers will marry hybrid power and all-wheel efficiency with the all-new Sport Hybrid SH-AWD design, a Honda invention that could be every bit as revolutionary as the first NSX.

Honda debuted the Super Handing-All Wheel Drive (SH-AWD) in 2004 as a full-time, fully automatic all-wheel drive traction and handling system. The company has taken the system a step further, however, and integrated Hybrid technology.

The new SH-AWD system will feature a high-output lithium-ion battery and a three motor powertrain system that promises to improve efficiency by over 30% compared to conventional one-motor hybrid systems., which means greater power and gas-sipping fuel economy.

The Sport Hybrid SH-AWD features three motors: a mid-mounted direct injection Earth Dream Technology engine and a dual electric motor drive unit with a bilateral torque adjustable control system. The unique electric drive motor unit allows the all-wheel drive hybrid system to instantly generate negative or positive torque to the front wheels during cornering. The system is optimized for handling and traction and will likely hold up to the NSX legacy of superior street performance. 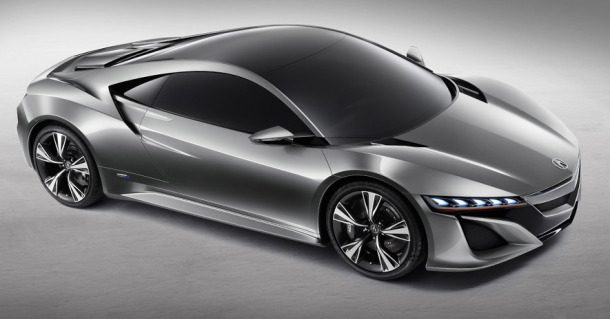 Finally, power will be delivered through a seven-speed dual clutch transmission that promises efficiency, reliability, and snappy performance. The result will be a combination of power and fuel efficiency that no other high-performance vehicle can match – V8 power with V6 fuel economy.

The new Acura NSX is expected to produce a 400 peak horsepower and 295 lb-ft of peak torque, most of which will be available at idle. Combined with what will undoubtedly be a very light vehicle, these numbers promise excellent performance. What’s new, Honda engineers expect the new Acura NSX will return a combined gas mileage of 30mpg.

The new Acura NSX supercar is expected to go on sale in 2014, but consumers can get a glimpse of SH-AWD technology when the new Acura RLX debuts at the 2013 Detroit Auto Show in January. Until then, we’ll just have to close our eyes and dream of a lightweight, high power supercar that handles like a dream and doesn’t burn a lot of gas.