This is a guest article from Paul Roberts 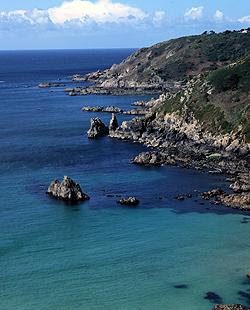 Despite their reputation ten, maybe twenty years ago, stringent rules and the emergence of the Organization for Economic Co-operation and Development means offshore banks are now considered an accessible and viable option for savers whether they are expats or not. For those looking for the best savings accounts in Europe, offshore finance has long been connected to areas such as the Isle of Man and Switzerland – but more recently, Guernsey has also established itself as a contender.

While the financial sector may not yet contribute to the Guernsey economy as much as it does in Switzerland and on the Isle of Man, banks have been beneficial to the development of the Channel Islands since the 60s. Today there are around 55 banks on the island, due as much to its desirable and convenient location, as its low taxes – a statistic that is all the more impressive when one considers its size of 25 square miles. That’s an average of more than two banks per mile. Most recently, Guernsey has been fondly portrayed as something of a retirement destination by Ann Treneman in The Times. It seems that despite there being ‘no capital gains tax, no inheritance tax and no VAT,’ as well as a low-level income tax of 20 percent (a level supposedly set when the Germans occupied the island from 1940 to 1945), islanders are keen to move away from the term ‘tax haven’ and toward the decidedly more positive: ‘international finance centre’. The reason for this identity realignment? Well, during recent years Guernsey has striven to get onto the ‘white’ list of the Organization for Economic Co-Operation and Development – and now it seems they have done so. The OECD originated in the post-war years, but was officially established as it looks today in 1961. The organization aims to bring together the governments of countries (it currently includes the UK, the United States, France, and more recent members: Poland and Slovakia) in order to ensure and maintain financial stability, to contribute to growth in world trade, and to coordinate economic development. On the island as a whole, of course the credit crunch and following recession has had some effect on the island – with a slowdown in growth and a proportion of redundancies. But the political and financial stability of the island are testament to the benefits many find in offshore banking centers – and if one can afford to live there (house prices are comparable to London) there looks to be much going for Guernsey. And other islands like it. Paul Roberts writes about finance and offshore savings.

About Guest Writer
This post was written by a guest writer. If you’d like to add a guest post in Money Hacker, please check out Write for Us page for details about how YOU can share your knowledge with our community.