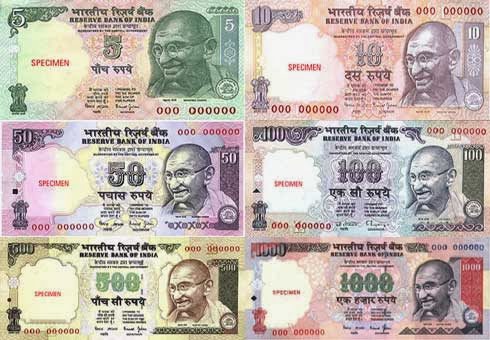 THE INDIAN RUPEE IS THE official currency of the Republic of India. The Rupee has been in use in India and her neighbors for hundreds of years now. This has resulted in many other countries adopting the rupee as their currency too. The Indian rupee symbol ‘‘ was officially adopted in 2010.

History of the Rupee: The history of the Indian rupee traces back to Ancient India in circa 6th century BC. The Hindi word rūpiya is derived from Sanskrit word rūpya, which means ‘wrought silver, a coin of silver.’ Pre independence, the Indian Rupee was legal tender in several British Colonies especially in East Africa and Asia. It was also used as an official currency in Aden, Oman, Dubai, Kuwait, Bahrain, Qatar, United Arab Emirates, Kenya, Tanganyika, Uganda, Seychelles and Mauritius. The Indian government introduced the Gulf rupee – also known as the Persian Gulf rupee (XPGR) – as a replacement for the Indian rupee for circulation outside the country with the Reserve Bank of India (Amendment) Act of 1 May 1959. The creation of a separate currency was an attempt to reduce the strain on India’s foreign reserves from gold smuggling.

The Rupee, Gold and Silver:

After the Prussian War, around 1870-71, the entire global economy then moved to what was known as a Gold Standard – i.e., the standard exchange currencies were fixed against reserves of gold. This led to a gap between the countries that used silver as a medium for exchange. India’s currency has always been in silver and this made trading with developed economies difficult as most of its trade was either with Great Britain or countries that traded with Gold. Silver increasingly got demonetized as newer reserves were being discovered. The impact of such a huge rift was profound as the fall of the rupee against the Pound was directly proportionate to the fall in the prices of silver.

India’s Economic system from 1947 to 1991 was based on a mixed economy combining features of capitalism and socialism, resulting in an inward-looking import-substituting economy that failed to take advantage of the post-war expansion of trade. In 1991, India adopted liberal and free-market principles and liberalized its economy to international trade under the guidance of Former Finance minister Manmohan Singh. Following these major economic reforms, and a strong focus on developing national infrastructure, India’s economic growth progressed at a rapid pace, with relatively large increases in per-capita incomes. However, the joy soon tuned to gloom as India started facing its Balance of Payment Issues from 1985 – 1990. Due to this, the rupee was devalued yet again especially by 1999. The rupee stabilized quite a bit in the early part of the new millennium and reached levels of 39 (in 2008) as versus the USD. With high remittances, sustained foreign investment inflows and the development of exports in the sectors of outsourcing and technology, the rupee led a strong battle against the USD. However, the subsequent global economic recession since 2008 has led to it steadily losing value ever since.

Indian could continue to remain very volatile in the coming months. However, beyond the short-term, for Rupee to strengthen in the medium-long term, the political stability remains a key factor. Analysts are keeping a close eye on the 2014 elections and the impact they will have on the economy as a whole will be immense. India’s tumbling rupee hit new lows in September 2013 and the RBI had to step in and intervene. The RBI decided to lend dollars to state-owned oil companies ‘until further notice,’ easing pressure on the currency. Since oil is India’s biggest import, the plummeting rupee and higher oil prices are “sharply increasing its import bills. The US Federal Reserve’s decision to press ahead with its asset-buying gives India’s battered rupee a reprieve and creates space for the Reserve bank of India (RBI) to scale back some of the measures put in place to support the currency. Analysts have pointed to the South Asian nation’s persistent, large current-account deficit, which makes India a net debtor. To bridge this gap between imports and exports, India needs a constant inflow of money to support its currency.

Visit our blog to get more such updates Kotak Securities Blog

Kotak Securities Ltd is one of the oldest and largest stock broker in India. We offer you investing facilities in various instruments like equities, derivatives, currency derivatives, Mutual Funds and IPO, through our branches and the internet. In addition to this we have a full-fledged Research Team with years of experience in the industry.