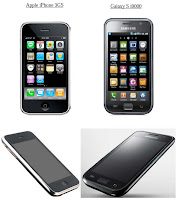 In a patent suit filed Friday, Apple claims that Samsung’s line of Galaxy tablets and phones willfully infringe on its own patents. Apple is seeking injunctions as well as actual and punitive damages.Samsung’s Galaxy Tab, which runs on Android, was released late last year. Apple claims the tab infringes on iPad patents and that the Galaxy S looks and feels a little too similar to the iPhone.Samsung is one of the fastest growing smartphone makers and has also emerged as Apple’s strongest competitor in the booming tablet market with models in three sizes, although it remains a distant second in the space.

Its Galaxy products use Google Inc’s Android operating system, which directly competes with Apple’s mobile software, the lawsuit said. However, Apple’s claims against Samsung focus on Galaxy’s design features, such as the look of its screen icons.

“This kind of blatant copying is wrong,” Apple spokeswoman Kristin Huguet added in a statement. “We need to protect Apple’s intellectual property when companies steal our ideas.”Samsung said in a statement on Tuesday that it would respond to the legal action “through appropriate legal measures to protect our intellectual property.”Apple CEO Steve Jobs has criticized Samsung and other rivals in presentations of new products or technology debates. Analysts say the response by Samsung to this has been muted, partly because Apple was Samsung’s second-biggest customer last year after Japan’s Sony.Apple brought in around 6.2 trillion won ($5.7 billion) of sales to Samsung in 2010 mainly by purchasing semiconductors, according to Samsung’s annual report.Samsung shares slipped about 1 percent in early Tuesday trade to their lowest level in one month, under-performing a 0.5 percent fall in the broader market. At 8:40 p.m. EDT, Samsung shares were down 0.7 percent at 861,000 won.In its lawsuit against Samsung, Apple noted that earlier versions of Samsung smart phones did not embody the same combination of Apple’s designs.”Even the icons in earlier versions of the Samsung smart phones looked different because they had a variety of shapes — and did not appear as a field of square icons with rounded corners,” the lawsuit said.Apple is bringing 16 claims against Samsung, including unjust enrichment, trademark infringement and 10 patent claims.