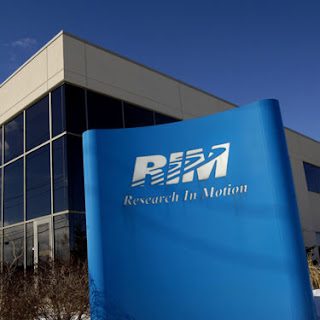 WSJ.com reported today that, BlackBerry maker Research In Motion Ltd. sliced its earnings outlook for the year and said it would start laying off employees, in grim results that suggest its aging smartphone line and delays in introducing new devices are eroding its business faster than anyone expected.RIM, which has been losing ground to rivals and cutting its financial targets, said it pulled in less revenue and sold fewer BlackBerry phones than expected for the first fiscal quarter ended May 28. It posted the first quarterly drop in BlackBerry sales since 2005.The company said the bad news will continue through the current quarter, which ends in August, since delays certifying its latest slate of phones mean they won’t start coming out until late August, missing an important back-to-school sales season.

Shares of RIM tumbled $5.15, or 15%, to $30.18 in after-hours trading following the report, after closing at $35.33 on the Nasdaq Stock Market Thursday. The stock has lost nearly half its market value so far this year, including the after-hours decline.

To help boost results, RIM said it plans to “streamline operations” by reducing headcount and reallocating resources to high-growth projects, in a program it began at the beginning of the quarter.

RIM executives declined to say how many jobs would be eliminated. The company employed about 17,500 people at the end of February.RIM’s marketing chief quit a few months before the PlayBook was about to be launched, and its co-chief executives have sometimes seemed out of sync about what the tablet should do and whether its main target should be corporations or ordinary consumers.Earlier Thursday, RIM said its chief operating officer, Don Morrison, is taking a medical leave and is expected to return later this year. Mr. Morrison, who joined RIM in 2000, oversees the company’s domestic and international operations.The company also said Larry Conlee, a former RIM chief operating officer, has returned as a special adviser. RIM didn’t say when Mr. Conlee returned, and didn’t define his role. The company said he has served in an advisory capacity at various times since his retirement in 2009.