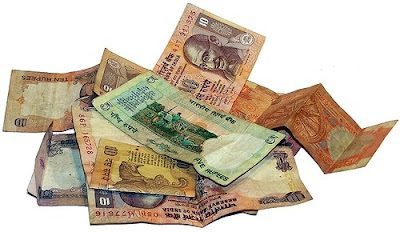 The Indian government has been incensed lately by its inability to prevent counterfeit rupees from crossing the border from Pakistan. The Finance Ministry reported that exchanges using faux money have increased by a whopping four hundred percent during the past year. Also shocking is the enormous amount of phony currency totaling nearly five hundred thousand dollars discovered during a recent raid on a Pakistani fabric shipment due for India. Indian sources believe that the counterfeiters operating out of Pakistan seek to utilize the realistic looking rupees to supply cash to terrorist groups and fund Indian drug networks. The government of India is particularly panicked because, as they have reported, investors could be scared away on a global level, deterred by fears that the money they encounter will prove to be fake. Therefore, the government is determined to crack down harder than ever on counterfeiters. But unfortunately, one of the biggest problems facing them is the high quality of the rupees themselves, which suggests that the technology behind their creation is of some sophistication. The Indian government has already stated their belief that the only such machinery capable of this sophisticated level of production can be found in government installations, as the notes resemble their genuine counterparts in the ways that watermarks, security threads, and micro-lettering are included. Some officials are pooh-poohing the suggestion that the Pakistani government could be trying to sabotage the Indian economy. According to these naysayers, allegations such as the ones hinted at by Indian officials are nothing new. However, the group Students Islamic Movement of India, banned from the country along with members of Lashkar-i-Taiba, a militant collection of Pakistanis, have been found in the past with counterfeit currency on their hands. Because of the severity of the problem, Indian officials are considering raising the sentence for counterfeiting from seven years to life imprisonment. The weight of such a sentence likens the offense to terrorism, which is exactly what the government wants. Counterfeiting could cause the wrong someone – an important investor, perhaps – to use a credit card for bad credit, scaring them and their capital away permanently. Counterfeiters use legitimate as well as illegitimate methods for smuggling in the contraband cash. Sometimes the money is passed into the country along with illegal weapons or drugs, but there are times when, as was the case with the shipment of Pakistani fabric wrapped around what turned out to be a prodigious sum of fake currency, the money is concealed inside a genuine business endeavor. Officials have also discovered that counterfeiters utilize commercial and passenger trains in their smuggling operations. Because the false money alone doesn’t yield much income, according to Indian reports, it is almost always mixed in with other items that will gain their smugglers a higher profit. Drugs and weapons are usually considered more valuable than counterfeit money alone. Bangladesh has also become a site for an increase in counterfeiting activity, where the money is tossed across the border to India. Of the fourteen people recently arrested for counterfeiting, many of the suspects reportedly could be traced back to both Pakistan and Bangladesh. Because of their positions, so close to India, the government has grown ever more concerned.

Declaration: This is a guest article