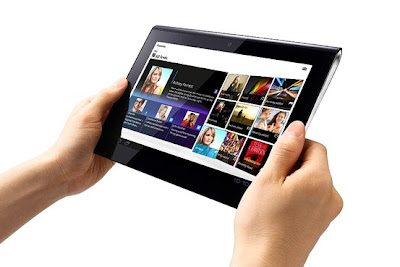 Sony, whose brand and reputation for design have long resonated with consumers, is trying something different. On Friday, it is launching a handsome tablet, called the Sony Tablet S, with an unusual, asymmetrical design and some software tweaks and content services it hopes can set it apart from the pack.

Like dozens of other tablets, Sony’s new entry uses Google’s Android operating system. And it costs the same as the Wi-Fi-only iPads—$500 for a 16 gigabyte model and $600 for a 32 gigabyte model. The Tablet S has no cellular-data option. It’s also late to the game, and had significantly weaker battery life than the iPad 2.

However, the Tablet S looks nothing like the iPad 2 or any other current competitor. One of the long sides of its rectangular, plastic body has a thick, rounded edge that makes the device look like a folded-back magazine. In fact, Sony has carried this effect over onto the back, continuing the black curve with a molded black plastic sheet that looks like the rest of the magazine cover laying over a flat, gray surface.

While this design makes the Tablet S much thicker than many competitors, it has several advantages. When you hold the device one-handed in portrait, or vertical, mode, it feels much more comfortable and balanced than any other tablet. When you lay it on a flat surface in landscape, or horizontal, mode, the rounded edge creates a natural angle for typing, without a case or stand.

This clever design makes the Tablet S feel lighter than the iPad when you hold it vertically, because more of the weight is in your palm—even though the two tablets are almost exactly the same weight.

At 9.4 inches, the bright, vivid screen on the Tablet S is smaller than the iPad’s 9.7 inch display or the 10.1-inch screen of Samsung’s comparable Galaxy Tab model. But plenty generous, and it didn’t feel cramped. The Sony is about the same length as the iPad 2, but is narrower, and found this proportion pleasing.

Unlike the iPad 2, the Tablet S has an SD memory-card slot though the plastic hinge for the little door that covers the slot sometimes got stuck.The Tablet S starts with the same software disadvantages as its Android brethren. While Android has a healthy selection of over 250,000 third-party apps (versus 425,000 total for Apple’s mobile devices), it has pathetically few tablet-optimized apps—estimated to be just a small fraction of the 100,000 tailored for the iPad.

Sony has added some nice software features to the Tablet S. Some make navigation easier, but many aim to build on Sony’s strengths as a media and gaming company. Unlike Apple, which takes a broader view of the tablet’s potential, Sony sees its tablet as primarily an entertainment-consumption device.

There is also a universal remote-control app that works with a built-in infrared transmitter to control TVs and other home-entertainment devices, even if they aren’t made by Sony.

Sony also is bundling services for buying music, TV shows and movies, e-books and games to create a content ecosystem like Apple’s.

The music service won’t be available until later this month, but it will be a subscription service with two monthly tiers, one for $3.99 and one for $9.99. The video service will be available with a very limited selection at launch, but the full service won’t appear until next month. It allows you to rent videos starting at $2.99 each. The games service will come along later this year, and Sony couldn’t provide details, except that it will offer PlayStation games meant for portable devices. The Tablet S will come with a trial membership to the music service and a free movie and e-book. It also comes preloaded with two simple games.

Still, Sony deserves credit for creating a novel design with real advantages and for building in some useful software. The Tablet S is worth considering when shopping for a tablet.