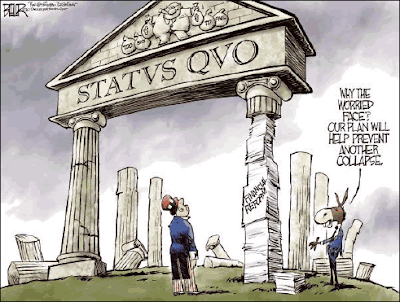 Developments in the global economy have led many governments to adopt austerity or stimulatory measures to boost economic recovery. The recent Eurozone crisis has sparked a new debate over the effects of austerity and stimulus on economic growth, debt levels and long term sustainability. Austerity is defined as a contraction in government expenditure, whilst increasing tax levels to boost revenue.

Commonly referred to as the contraction strategy, austerity can be beneficial in reducing gearing levels and interest costs. Through a reduction in government infrastructure spending, the country is able to focus on promotion of growth industries and sectors. The Eur-ozone has recently implemented strict austerity guidelines by which Ireland and Greece must adhere. Political analysts predict that the austerity measures could benefit the long term growth within the EU, as new structural and fiscal reform is adopted. The consequences or drawbacks of austerity can be quite economically catastrophic. In essence, the reduction in government investment, could lead to a fall in money supply and deflation. Investor confidence would track the austerity and the level of direct investment would be limited. Recent figures released indicate that unemployment levels in 90% of the countries that have implemented austerity have not contracted.

Stimulus has an inverse relationship with austerity, in that the strategy adopts an increase in spending in infrastructure and investments. To boost the levels of liquidity within the market and support financial instability in certain sectors, stimulus can be adopted. A good recent example of the implementation of stimulus was that of the US government and its purchase of General Motors, AIG and Citigroup. In an effort to reassure the market on the long term viability of these companies, the government injected stimulus through investment. Focusing on loosening fiscal policy to induce investment, can be a significant benefit of stimulus. Promotion and support of industry sectors, coupled with adequate infrastructure spending, can lead to significantly quicker economic recovery. Stimulus also promotes an injection of money supply into the market, which will have long term positive inflationary ramifications. Countries that have experienced long term stagflation will reap the benefits of government stimulus. The drawbacks of stimulus include excess expenditure, and the potential for high inflation. Over stimulation could exacerbate government debt and spark a secondary crisis of confidence. The US government focused on this strategy which resulted in an appreciation in the government debt levels. Inflationary pressure due to excess money supply could push the economy back into a recessionary scenario if not managed effectively. Central Bankers in many cases will raise the risk free rate slightly to capture a short term overflow in stimulus. Such a move could also boost consumer and market sentiment levels. Austerity and Stimulus are two strategies that are critical to the economic recovery process. In light of the inefficiencies of both, many believe that a mixed strategy could be effective. A combination of tax reform, coupled with government expenditure.

Author bio: Chris is experienced internet marketer interested in key technologies to make your online business perform. During his career he worked for some of biggest Australian brands. Currently employed as marketing consultant for Australian currency conversion company, OzForex.