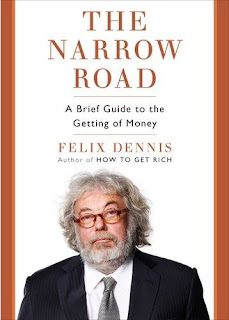 One of the world’s most successful media moguls shares eighty-eight tips for starting a business and getting rich.

In How to Get Rich, British mogul Felix Dennis told the engaging story of how he started a media empire and became one of the wealthiest men in Britain-all without a college degree or any formal training.

Now he shows readers exactly what it takes to start a business and make it successful. Dennis offers a pithy guide, The Narrow Road: A Brief Guide to the Getting of Money, for those determined to attempt what he calls the getting of money-regardless of the consequences. His eighty-eight tips include:

– Do not fall in love with any project. You may believe in it wholeheartedly, but must remain prepared to abandon it should it show signs of failing.- If you are unwilling to fail, sometimes publicly and even catastrophically, you will never be rich.- You will never get rich working for your boss.No one knows better than Dennis what it takes to get rich, and his battle-tested advice-delivered with his signature wit-will surely appeal to serious entrepreneurs.

Dennis, founder of Maxim magazine, is one misunderstood mogul. He intended his previous book, How to Get Rich, to be ironic. Readers found it “inspirational,” and he’s back in the ring to make his point. Like the first book, this is another tongue-in-cheek “anti-self help manual, written to dissuade the majority of readers from making the attempt to acquire real wealth.” He presents short meditations on motivation, rules of management, and conquering mental impediments. – From Publishers Weekly